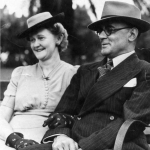 “In memory of Vlase, whose work had a profound effect on the cultural life of the Greek Community of Melbourne, with the request that the following excerpt and images about the life and work of Vlase Zanalis be used for inclusion in the Greek Australian Art Directory (GAAD).”

Vlase Zanalis was born on the Greek island of Castellorizo in 1902 and migrated to Western Australia in 1914.
He would gain national acclaim in 1934 for his “The Birth of a Nation”, but it was his work after 1948 on the Australian landscape and Indigenous themes that dominated his life paintings.

Zanalis’ contribution to the Greek dimension of Australian culture may be partly seen in the iconography of churches across the country. For many Greek Australians it is for his iconography in Greek Orthodox churches in Queensland, NSW and Western Australia that he is best known. Beyond the religious paintings, however, Zanalis captured in sweeping landscapes the contrasting red soils and white trees of the Pilbara, the rugged grandeur of Central Australia and the unique character of the Kimberley.

Midway through his career, Zanalis began a relationship with Aboriginal culture, which dominated his art for the last twenty years of his life. He became one of the first non-Aboriginal artists to value Indigenous Australians and their culture. Vlase Zanalis died in 1973 and was cremated at Perth’s Karrakatta Cemetery, WA.

These included works of the Kimberley – where he had spent eight months in 1948 camping at Derby, Cockatoo Island, Yampi Peninsula, the King Leopold Ranges and Fitzroy Crossing – and the Northwest as well as his first Aboriginal subjects, painted at Forrest River Mission in the east Kimberley. The visit to Forrest River Mission in 1949 was the artist’s first contact with traditional/remote Aborigines and their art and began a twenty-year fascination with Aboriginal themes for Zanalis.

The subjects of his outback and Aboriginal art were drawn from the fringe-life of Darwin, from visits to Kimberley cattle stations and three Western Australian missions: Forrest River Anglican Mission, west of Wyndham, Mowunjum, a Presbyterian Mission on the outskirts of Derby and Jigalong in the Western Desert which was administered by the Apostolic Church.

Baobab trees, or boabs, feature in several of his Kimberley paintings. The ancient boab at Dadaway lagoon, near the Forrest River Mission village appeared, in at least two paintings. Zanalis knew of the historical significance of the tree. He had been told that the first pastoralists venturing into the area built a slab stone homestead near the tree in 1887. He was shown the cross, carved into the trunk that marked the grave of the first white child born in the east Kimberley.

He is allegedly the first non-aboriginal artist to see the spiritual significance of icons in Aboriginal belief and his Aboriginal portraits form a unique collection in Australian art. Zanalis’ Orthodox background and commissioned iconography from an earlier time gave him a sense of understanding and appreciation of the spiritual depth of traditional Aboriginal wall painting. He had a fascination with the icons Aborigines painted on sheltered cliff walls ten kilometres from Forrest River Mission. But when he applied these to his art, he was not always true to the original.

One painting shows men before a wall decorated with icons that are mostly from Zanalis’ imagination. Much of the wall art, though ‘aboriginal’ in appearance, is too carefully arranged and not true to the original.

Zanalis saw the indigenous Australians as a proud and dignified people and imposed elements of classical Greek culture on his portrayal of them. In several his paintings their stance and appearance are reminiscent of ancient Greek statues of the Olympian gods.

Here’s part of Zanalis’ own reflections on his outback artwork when, in 1967, he wrote to the Assistant Commissioner for Taxation explaining his Aboriginal Memorial Collection comprising 88 paintings:

“Since retiring and receiving my pension I have devoted my time to the study of the life and customs of the Aborigines. Within the last two years I have had two expeditions into the Western Desert. My intention is to record the life of this fast vanishing race, and I happen to be the only artist in the Commonwealth who has penetrated into their life and secret ceremonies.”

The Literary Journal of the “Greek Cultural League”, in 1988, citing an unnamed art critic of The West Australian, said of Zanalis:

“With the death of Vlase Zanalis [1973], the northern Aborigines have lost a true friend, and Australia one of the most dedicated and sincere artists; a man able to get to the inner truth of a subject and put it on canvas. He was a pioneer of the north and of Australian art and his endurance and dedication were in the best European tradition.”

Professor George Kanarakis also wrote a chapter about the artist in his book, ‘In the Wake of Odysseus: Portraits of Greek Settlers in Australia’ (1997).

To read more about this noteworthy artist please refer to Portrait of a Western Australian Artist: Vlase Zanalis. 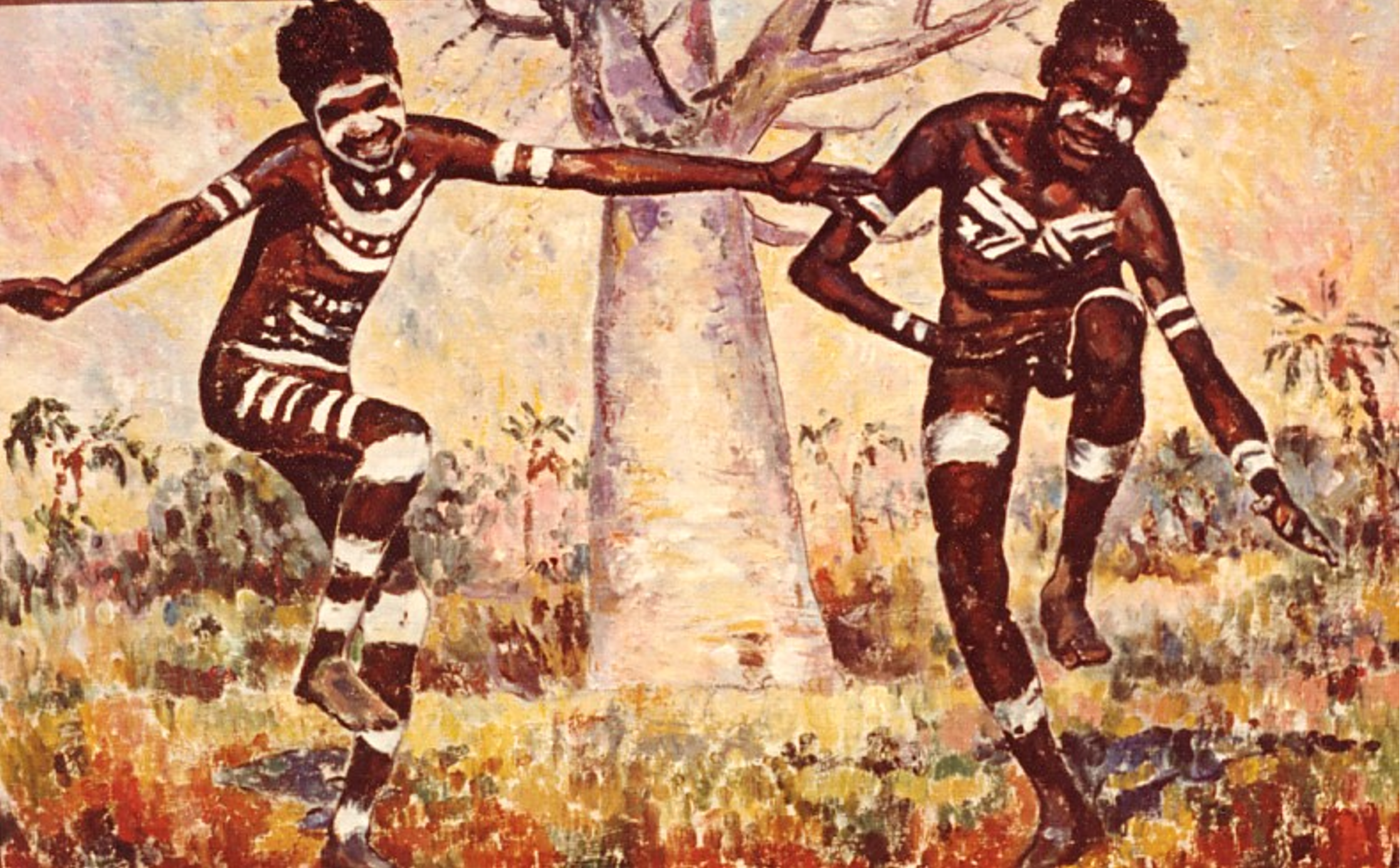 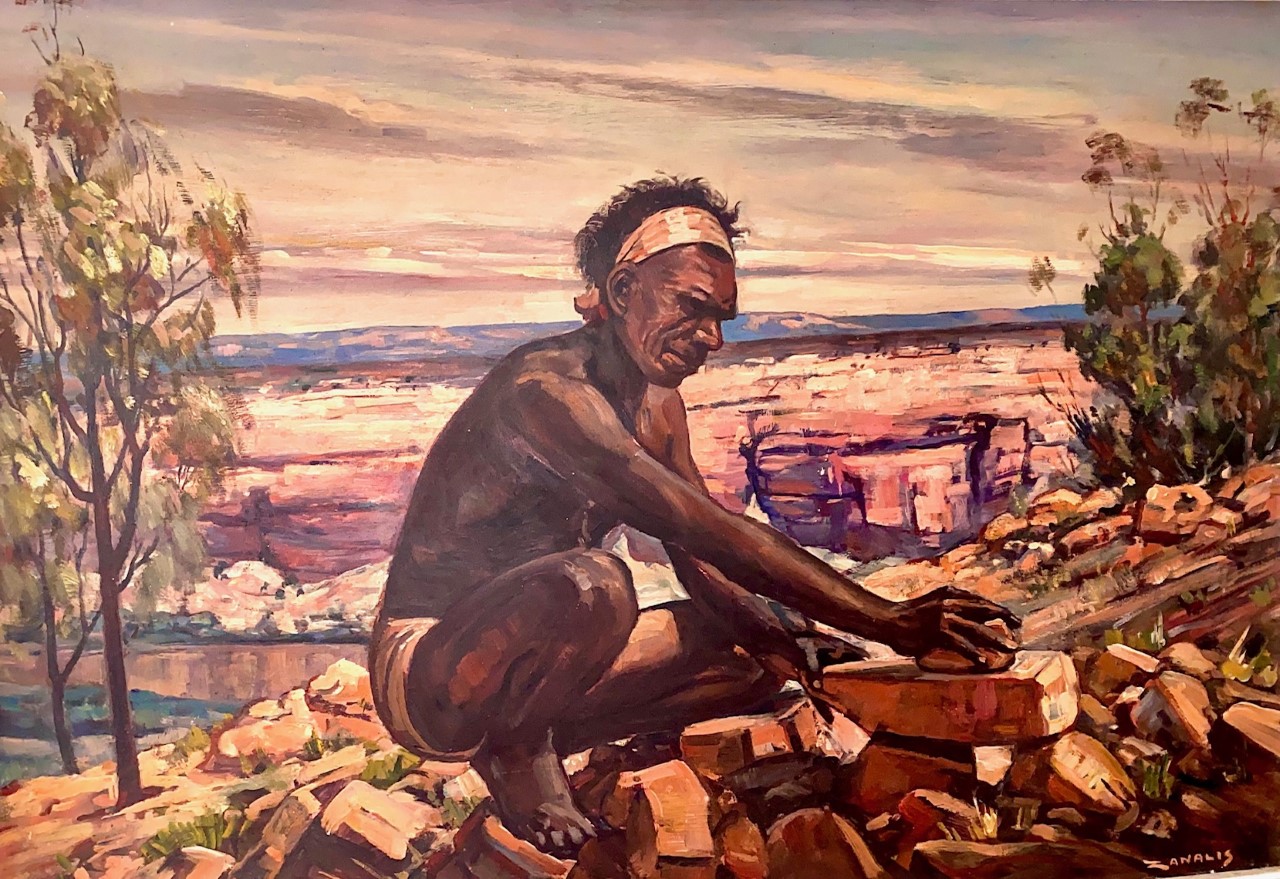 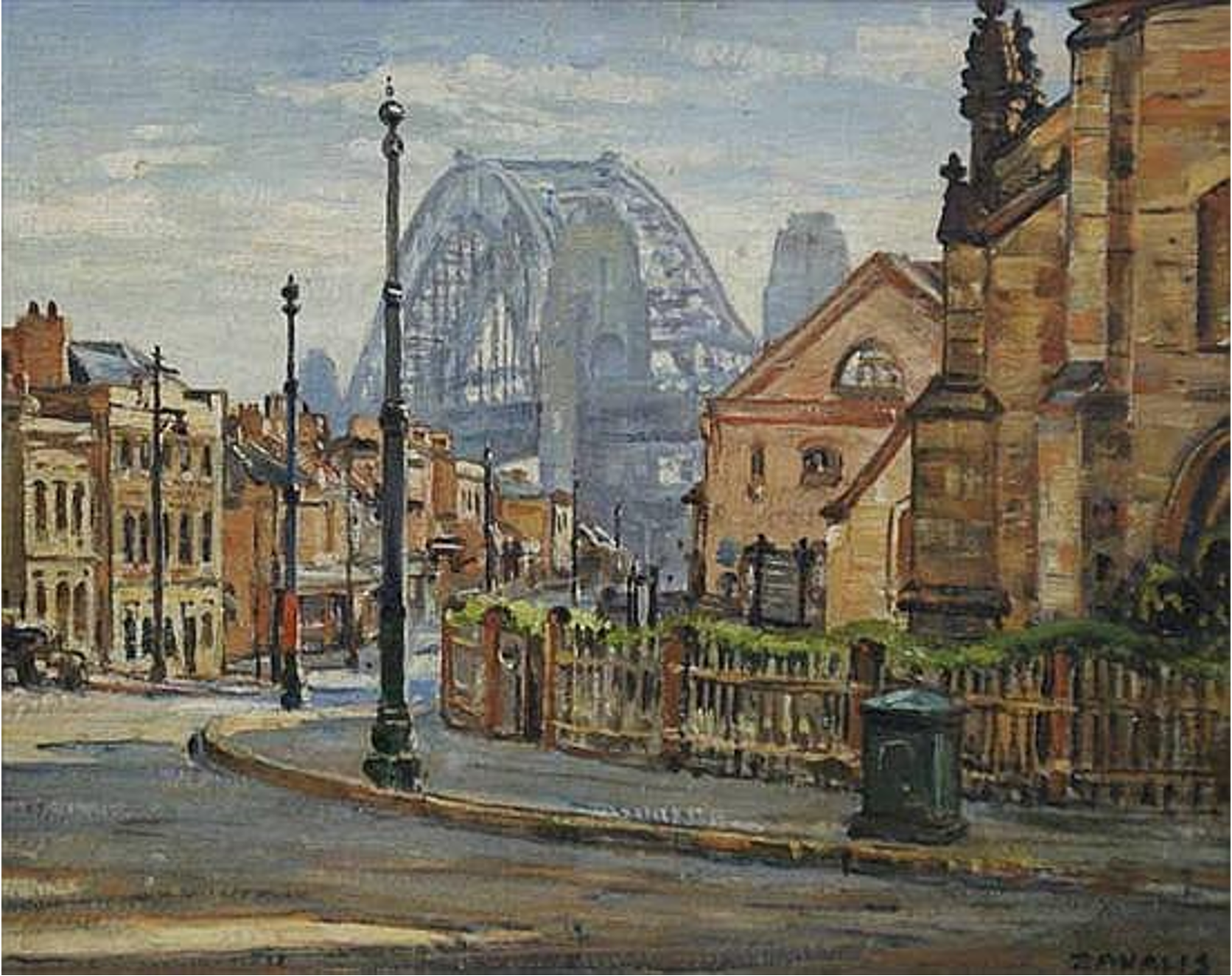 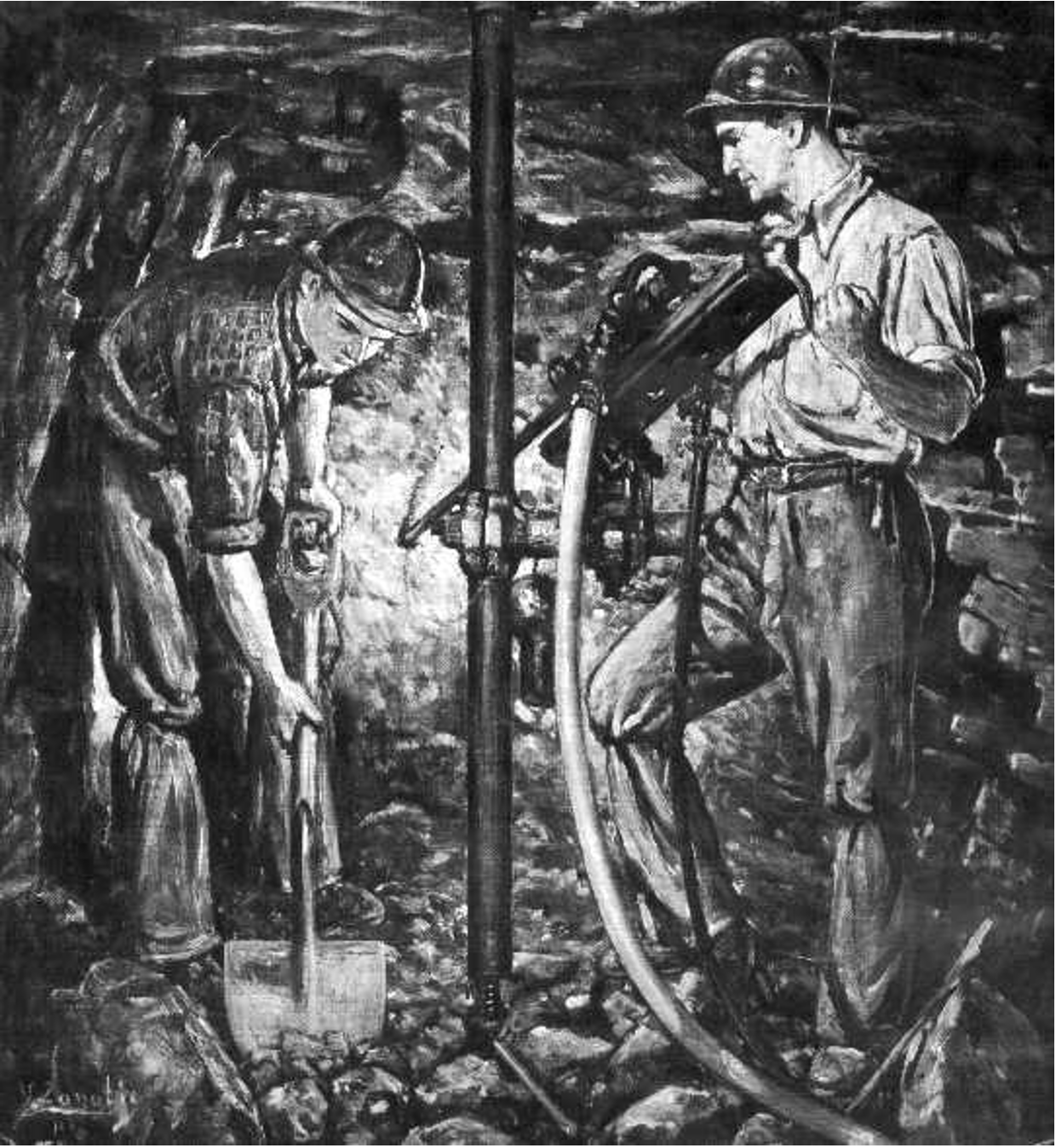 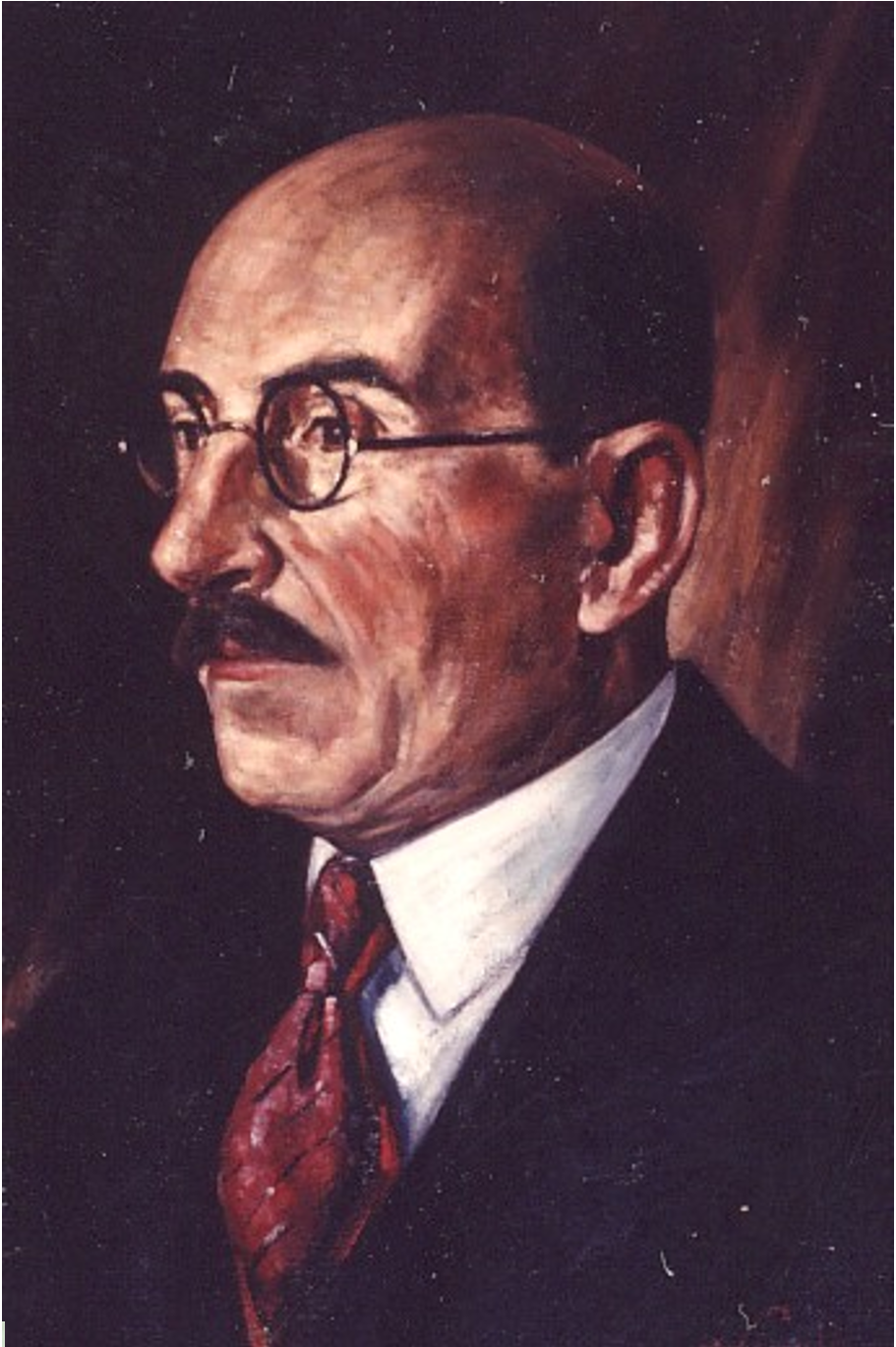