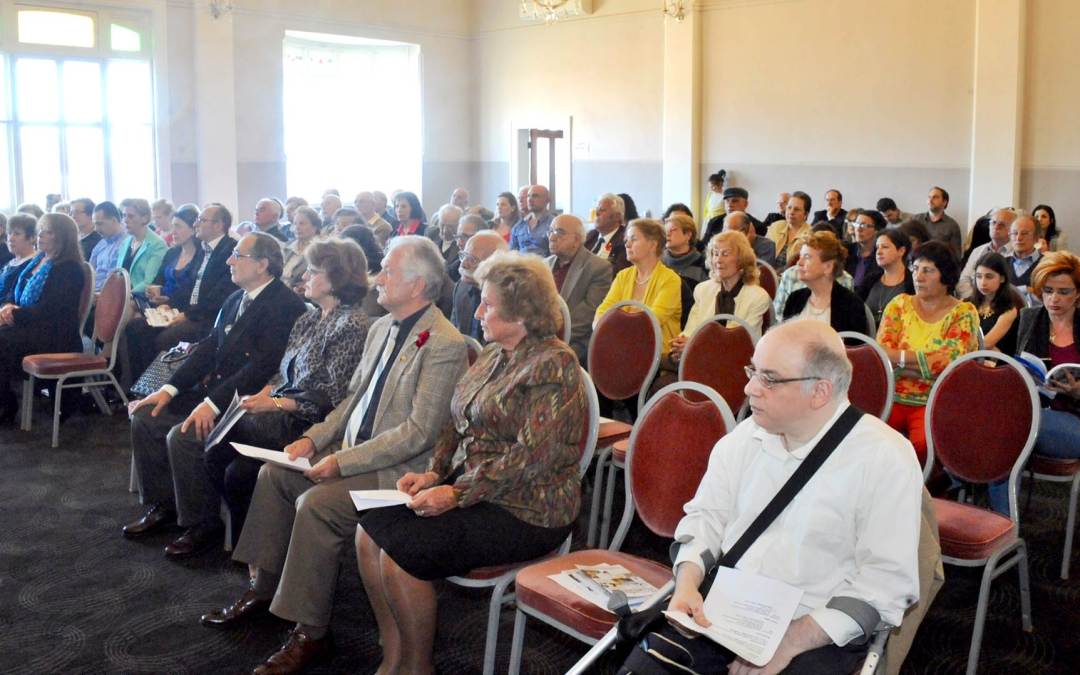 On Sunday 5th October, the Greek –Australian Cultural League (GACL) presented the periodical “Antipodes” vol. 60 and announced the annual Literary Competition results for 2014. This took place in the wonderful atmosphere of the refurbished hall belonging to the Panarcadian Association of Melbourne “O Kolokotronis”, in North Melbourne with a very large number of invited guests and devotees of the literary word in attendance.

The proceedings began with the GACL Committee Members handing over a cheque of $2000 to the representative of the Greek Community of Melbourne, Mr Theo Markou, towards the completion of the newly constructed building.

Mrs Cathy Alexopoulos, President of the GACL, continued by speaking about the role the periodical has played in the Diaspora and indeed in the promotion of Hellenism in Australia. Aspects of her speech could be paraphrased thus:

“The periodical has been circulating in the broader Australian community as well as overseas for 41 years and is the longest circulating Greek-Australian periodical. Its enduring existence is a credit to the outstanding contributions, the excellent work of the successive editorial committees and the visionary work of the Administrative Committees of the GACL. Throughout the years it has featured works by Greek-Australian writers and artists in either English or Greek whose contribution to the maintenance of the Greek culture and literature is assured. Every year the periodical is dedicated to a well-known person in the Greek-Australian Diaspora who has contributed to the promotion of the Greek letters or the Greek culture in various ways. This year the periodical pays tribute to

The president thanked the members of the League who were involved in the Editorial Board, especially the editor, Mr Kyriako Amanatides (ex-officio member) for his dedicated and tireless efforts over a lengthy period of time, also to Theo and Soula Mantalavanos for their contribution in the page design and layout and to Mrs Dina Amanatidou for her meticulous corrections.

Appreciation was expressed to the many artists who not only eagerly participated in the Art Exhibition “Antipodean Palette” in May/June 2014, but also offered their works for the enrichment of the pages of “Antipodes”. Sincere thanks were offered to the many contributors and collaborators of the periodical as well as the generous sponsors -Peter Zapris- Ellikon printing company, Agora/Dialogue- Dinos Toumazos, Tasso and Matoula Dourvatzidis-Κalimera Kids, Omiros College, Con Antoniadis-Security Plus-Roller Shutters and Blinds and Theo and Soula Maltalvanou – OOI Creative Communications. 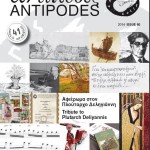 The periodical was launched by Dr Thanasis Spilias who congratulated the League for their excellent contribution to fostering the cultural and literary progress of the Greek community in Australia. Below is a short exert from his speech-

“It is an honour to be given this opportunity to launch the 60th edition of this important journal.

Warm congratulations are due not only to the many writers who have contributed to its success but also to the organizers and the Committee members of the Cultural Association.

Yet again, the original aims and the aspirations of this journal are amply fulfilled, and it continues to provide a respected forum for writers and researchers.

The range of interests comprises poetry, short story, research, gnomics, critique and comments in both languages -Greek and English. This provides opportunities for both Australian born and more confident Greek speakers.

I am sure you will agree with me that the journal is a worthy achievement that justly deserves our appreciation.”