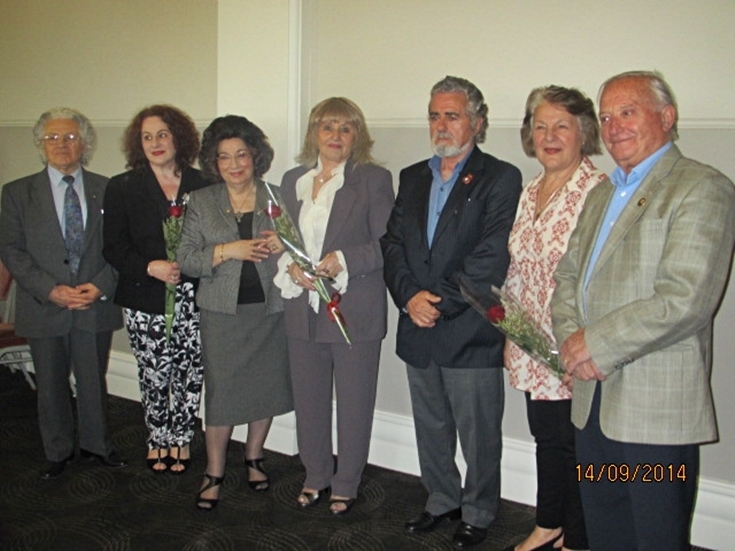 Two poetry collections of Dina Amanatides, “Fragile World” and “Burning Experiences”, were recently launched at the Panarcadian Association of Melbourne “O Kolokotronis”. The books were officially launched by the journalist and writer, Vivienne Morris.

She is an exceptionally accomplished person, widely known not only within the Greek community but within the wider Australian community as well.  Moments such as this provide us with a welcome opportunity to reflect on her many and varied undertakings, to marvel at the professionalism displayed throughout, and to extend to her our heartfelt appreciation.

Vivienne Morris was born in Mytilini, Lesvos, where she completed her high school studies. After migrating to Melbourne, she continued her studies at Melbourne University, excelling in Classical Studies and Modern Greek, and winning the Vrahnas Memorial Award for excellence in Greek Studies. She taught Greek at both secondary and tertiary levels, her respect for education reflected in her eventually becoming the Founder and Executive Director of the Australian Hellenic Centre of Education (Open University). Vivienne has been passionate about the dissemination of Greek language and culture and she has worked tirelessly in this regard. A small sample of her undertakings include:

Her “Portraits of Hellenes in Antipodes” wherein are included the stories of 40 Greek immigrants to this country, is a testament to her commitment to our community and establishes her as a writer of note.

However it is as a pioneer of the woman’s voice within Greek-Australian journalism that we know her best. Within the pages of Neos Kosmos, she has covered every topic, from the parochial to the political, with consummate professionalism. She is the recipient of the Hellenic Award, and the Victorian Government Award for Excellence in Multicultural Affairs, both awarded for her outstanding contribution to Journalism.

Dina Amanatides was born in Meligala, a township in Southern Greece. After completing her secondary studies in Athens, she migrated to Australia in 1958, and has since been living in Melbourne with her family. Her literary works have been published (either in the original Greek language or in English translation) in many newspapers and magazines in Australia, Greece, the USA and Canada, and have been included in numerous anthologies. Her poems and short stories have been taught extensively in Modern Greek Studies in Secondary Schools and Universities. She completed a Modern Greek Studies course at the New England University and has taught Greek language and literature at the secondary level for many years.

Dina Amanatides has been consistently writing for over 56 years, publishing 24 books, three of which have been reprinted four times. Her literary output covers poetry, short stories, scattered thoughts, and plays. She has won many literary competitions both here and overseas and has gained a plethora of awards and tributes.

The bestowing on Dina Amanatides of the Medal of the Order of Australia in the 2011 Queen’s Birthday Honours List is an extraordinary achievement, both on a personal level for Dina Amanatides, and on a community level for the entire Greek-Australian Diaspora. There are many dimensions to this award, the ramifications of which are profoundly important. Firstly, it demonstrates that talent and humility can be recognised and rewarded. It is, moreover, a testimony to the fact that literature is important, that it touches people’s lives, that it can offer hope and comfort, initiate joy, empathy and reflection. That the Australian Government should see fit to honour a Greek-Australian writer with this prestigious award demonstrates that what we – that is, writers, researchers, the Greek-Australian Cultural League, the Hellenic Writers Association – what we are doing is important, that it has validity within this country’s official perception of itself.

Concluding proceedings, Konstandina Dounis read the following poems from the two poetry collections of Dina Amanatides, Fragile World and Burning Experiences, which Konstandina herself translated into English for the occasion of the launch of the two books. It has to be said that Konstandina’s translation and recital of the poem “Memory’s Thief” brought tears in everybody’s eyes.

I hold something tightly in my hands.

I think that it’s a set of keys.

Yes, I recognise them. Two keys.

They must be my house keys.

I know I have a house somewhere…

Familiar. A happy home once.

I lived there for many years.

I loved my husband madly. Passionately.

Now, I don’t even recognise his face.

I think I have children and grandchildren…

I don’t even remember them clearly…

I hold the keys in my hand.

I remember the road.

I venture onto the road.

The green trees look at me, enigmatically.

I search, seeking the number of my house.

I don’t remember it. I have forgotten the number.

All the surrounding houses are unfamiliar.

And yet, I do have a house…

Everyone there is anxiously waiting for me,

wondering why I am late.

How many days? How many years?

My thoughts are in a haze.

I can’t find the house

I no longer have a house…

I no longer remember beloved faces and objects.

I am the living dead

It’s just that I still hold the keys in my hand,

but there are no doors to open.

Hands? Keys? I have nothing now.

Who am I? Where am I going?

against the night’s darkness,

We only invite others

when the occasion is joyous.

In times of sorrow

those who love us

When you turn your back

From the ascending plane

the city below is of many colours.

As though made of glass.