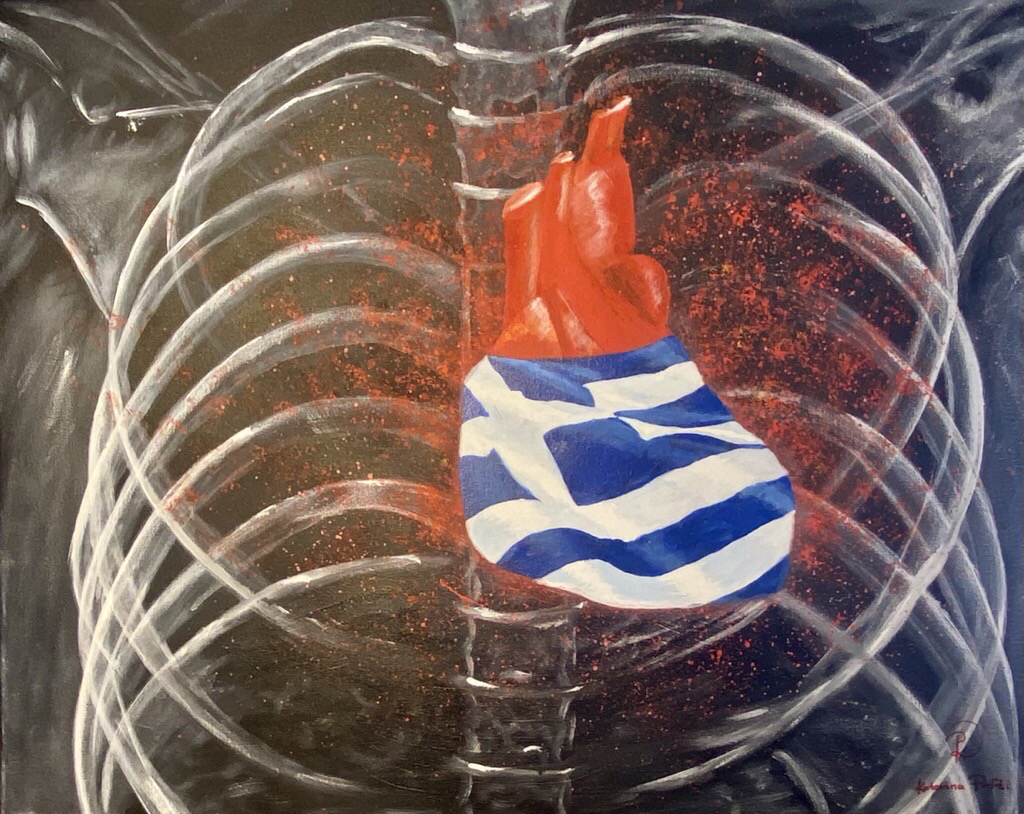 The painting is named after a verse from the Greek National Anthem also known as the Hymn of Liberty, who’s powerful stanza declares that we have arisen from the sacred bones of the Hellenics.

Inspiration of this piece came during the artists visit to her specialist, when he brought up on screen an x-ray of her sternum. The x-ray showed the spine, rib cage and a shadow outlining the heart. Instantly she was reminded of the verse in the National Anthem and wanted to bring the poets words to life by tantalising the observer’s visual sensors, so they too could see through her eyes. At that moment she was not staring merely at an image of bones but rather the DNA of her ancestors, which like a carefully orchestrated ladder took her into an attic were all the precious memories of the glorious and painful past were hidden. The bones of resilience that held a nation together maintaining its unique identity and a heart on fire yearning for freedom and paying the ultimate price to achieve it, it’s blood.

Like the x-ray, the contrast of black and white helps the main character the bones, take centre stage. The heart is red to illustrate the fire that is burning within it. The red of blood resembles our ancestors sacrifice and finally the Greek flag within the heart. The Greek flag appears to be streaming in the wind while caressing and moulding around the shape of the heart. The artist has done this to illustrate our turbulent past, the Hellenic free spirit and that at the base of our heart lies our flag which epitomises our values.

Metamorphosis is the process of something taking on another form. In geology for example, during the process of metamorphosis the original rock (protolith) changes to a new type of rock without losing the properties of its original state. In fact, Metamorphic rocks are classified by their protolith (original rock). Here the image wants to portray just that. Whilst we may change over time, at the core of our structure we remain true to our original state. For Hellenes this is has happened many times during our history, from surviving 400 years of Turkish rule to the great waves of migration. Many Hellenes now call Australia home and have embraced this land and its values. While generations to come will inevitably adapt and change even more, one thing is for certain; no matter how much metamorphosis occurs the Hellenic DNA cannot be removed from their bones.

Some rocks may change completely with time and pressure, Hellenes will not. 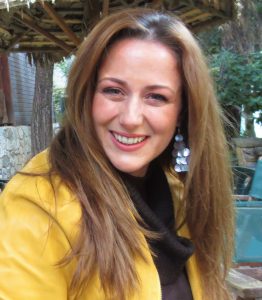 I was born and raised in the picturesque town of Kouvaras located in the Province of Eastern Attika, approximately 40kms outside of Athens. The town is built on lush green hills, surrounded by endless views of Greece’s famous beaches and islands. In such an inspiring environment it was only time before my artist nature surfaced and developed.

In 2003 my love for art led me to the atelier of internationally acclaimed artist Antonios Politakis, who took me under his wing. For five years I studied Art and Art History alongside him. It was he who gave me the passport to the endless journey called Art.

Over the years I have participated in and organised many personal and group exhibitions all over Greece. A highlight of my career was being invited to exhibit my work in an exhibition named “Greece’s Best Modern Artists”. I have been very fortunate to witness my work been displayed in government and private buildings, join the collection of well-respected Art Collectors, and grace the walls of folk who simply had an appreciation for the arts.

Since arriving to Australia in 2014, I have dedicated my time to my family and raising our children. However, during this time I did not entirely stop working. I presented my work in a personal exhibition named “Looking Forward”, participated in the 2017 Antipodean Palette, and commissioned two unique pieces.

As 2021 dawns, I feel rather excited as I embark on a new journey to reignite my art career, start working on new pieces and become more active in the arts community. Antipodean Palette 2021 was the impetus for this new beginning. My exhibit named “Apo Ta Kokala Vgalmeni” (from the bones arisen), commemorates the 200 years of Greek Independence while attempting to bring to life the lyrics of the Greek National Anthem.

I hope that you find my work inspiring and that it speaks to you in a way that you too may embark on the endless journey called Art.