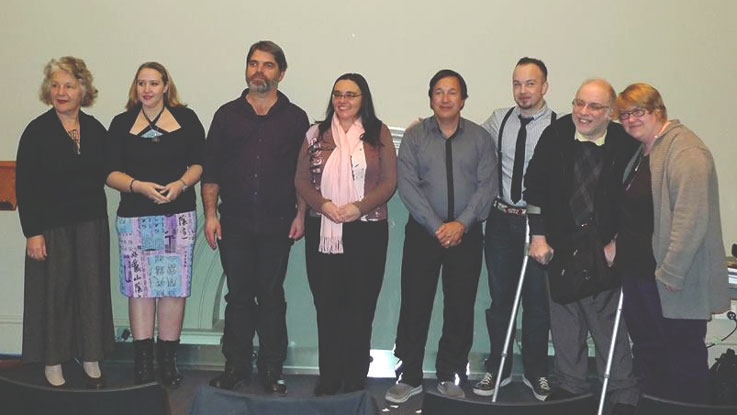 On Friday 9th August 2013, the Greek Australian Cultural League will be introducing American publisher and poet David Messineo to the Australian audience. David, the author of eight poetry collections, will recite selected works from his recently published Historiopticon, a book which examines legendary figures, events, and personal sentiments relating to subsequent eras of American history.

Accompanying him with compositions of their own will be a group of eight Australian poets: Pixie Trangas, Alicia Sometimes, Nick Trakakis, Gaetana Pellegrini, Wahibe Moussa, Gaylene Carbis, Monica Athanasiou, and Paul Kiritsis.

The event will be held at the Workshop Space on the Fourth Floor of The Wheeler Centre at 176 Little Lonsdale Street in Melbourne. We hope to see you all there for a supernal night of poetic contemplation!

David Messineo’s bio
David Messineo is among the 20 longest-serving poetry editors and independent literary magazine publishers in America, having started as a poetry editor in 1979 and independent publisher in 1981. He is a rare three-consecutive-year winner in the national American Literary Magazine Awards (1994-1996) for Sensations Magazine (www.sensationsmag.com), which closes service in July 2014 after 27 years of service to poets and fiction writers. He was one of 26 individuals to receive a 2009 New Jersey State Jefferson Award for Public Service, and won the 2011 Dwyer Award for Journalism in New Jersey History for some of his history research. David is the author of eight published poetry collections: First Impressions, Suburban Gothic, A Taste of Italy, Restoration, A Taste of Brazil, Formal, The Search for the Sapphire Robe, and Historiopticon. His ninth poetry collection, Trailblazer, is planned for 2021, which will mark his 50th anniversary
of poetry writing, and the start of his sixth decade in this field. Plug “David Messineo” into YouTube and you’ll find a 22-minute feature reading from his earlier tour, Formal; plug “David Messineo” as Author into www.bookfinder.com, and you’ll find some of his earlier books available for purchase. For a preview of and to purchase Historiopticon, please go to www.blurb.com/b/4215481-historiopticon.

Venue: the Workshop Space on the Fourth Floor of The Wheeler Centre at 176 Little Lonsdale Street in Melbourne
Host: Cathy Alexopoulos and Paul Kiritsis, the President and Vice President of the Greek Australian Cultural League