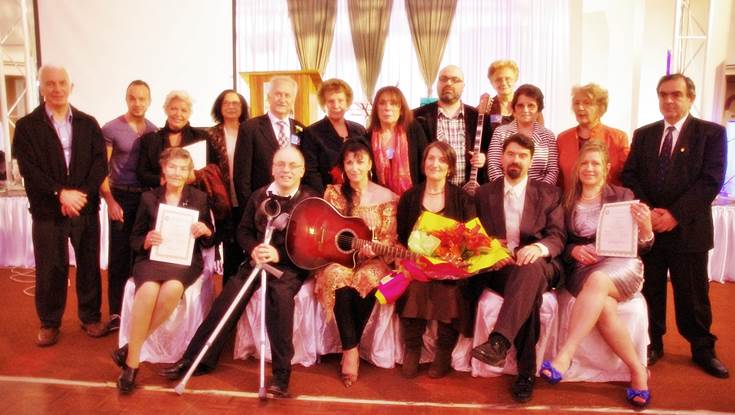 On Sunday 7th October, the Greek –Australian Cultural League (GACL) presented the periodical “Antipodes” vol. 58 and announced the annual Literary Competition results for 2012, in the presence of Mrs Eleni Lianidou, the Consul General for Greece, Mrs Maria Vamvakinou, M.P. Member for Calwell, Mr Kyriakos Amanatides, Honoury President of the GACL and other distinguished guests, members and friends of the League. This took place in the wonderful atmosphere of the grand hall belonging to the Panarcadian Association of Melbourne “O Kolokotronis”, in North Melbourne with a very large number of devotees of the literary word and the musical world in attendance.

Mr George Vrakas, who is the current editor of the periodical “Antipodes” also the Assistant Secretary of the League, was the M.C. and welcomed all with a brief introduction and a call for those from the audience who were not members to consider joining.

Mrs Cathy Alexopoulos, President of the GACL, spoke about the role the periodical has played in the Diaspora and indeed in the promotion of Hellenism in Australia. Aspects of her speech could be paraphrased thus:

“The periodical has been circulating in the broader Australian community as well as overseas for 38 years and is the longest circulating Greek-Australian periodical. Its enduring existence is a credit to the outstanding contributions, the excellent work of the successive editorial committees and the visionary work of the Administrative Committees of the GACL. Throughout the years it has featured works by Greek-Australian writers and artists in either English or Greek whose contribution to the maintenance of the Greek culture and literature is assured. Every year the periodical is dedicated to a well-known person in the Greek-Australian Diaspora who has contributed to the promotion of the Greek letters or the Greek culture in various ways. This year the periodical pays tribute to singer, song-writer, Anthea Sidiropoulos, for her tireless and dedicated contribution to the arts and culture in the Greek-Australian community. Anthea is an energetic, humble, courageous and selfless person full of humanity and kindness. We, from the Cultural League are indebted to her for the endless hours of entertainment she has offered us without any remuneration and are very proud to dedicate this periodical to a second generation person who is an inspiration to others…..”

The president thanked the members of the League who were involved in the Editorial Board, especially the editor, Mr George Vrakas for his dedicated and tireless efforts over a lengthy period of time, also to Mr Frixos Ioannides, for his vast contribution in the page design and layout and to Mrs Matina Panagiotopoulou for her meticulous corrections.

Appreciation was expressed to the many artists who not only eagerly participated in the Art Exhibition in July 2012, but also offered their works for the enrichment of the pages of “Antipodes”. Sincere thanks were offered to the many contributors and collaborators of the periodical as well as the generous sponsors -Peter Zapris- Ellikon printing company, John and Angela Velos- Velos and Velos, Solicitors, Agora/Dialogue- Dinos Toumazos.

Mrs Eleni Lianidou, in her speech, commended the League for its visionary and long standing work, the important role that the periodical has played in the promotion and support of aspiring Greek-Australian writers and the need to continue to attract and inspire young writers in its realm especially at a time when consumerism and economic downturns are wavering our existence.

She too congratulated Anthea on her wonderful and artistic work and applauded her for being selected in this dedication.

The periodical was launched by Mrs Maria Vamvakinou who congratulated the League for their excellent contribution to fostering the cultural and literary progress of the Greek community in Australia. She continued with the following…. “…..The works of Nikos Nomikos, Kyriakos and Dina Amanatides, Nikos Kypraios, Vasso Kalamara, Dimitris Tsaloumas and so many others have been showcased in this important journal….which 38 years later is still the vehicle which inspires and encourages young people’s involvement in the cultural activities of the Greek community here in Melbourne…..key to its success has been its capacity to adapt to the changing nature of the second and third generation of young Greek Australians, while simultaneously maintaining the creative impulses and experiences of the first generation.  By publishing contributions in both Greek and English the journal ensures that young Greek-Australians find in “Antipodes” a forum and a vehicle to share their creative skills with the broader community. …over all those years it has published work of a high calibre making the “Antipodes” a source for serious scholarly study, a forum where outstanding literary and artistic works are made available to the broader public. It would not be an overstatement to say the “Antipodes” is very much the backbone of Greek-Australian literature in Australia…..”

Maria then continued to dedicate the second part of her presentation to Anthea Sidiropoulos saying the following… “…..Anthea’s journey is a long and colourful one. Unique, yet typical of her generation. She is first and foremost, a beautiful, melodic voice; a singer, a song writer and a survivor, a daughter of the Greek Diaspora who has forged a career shaped by heritage, hardship, heartbreak and heroics. Her early years would shape the course of her entire life. Growing up in Collingwood with politics and music-her late father Theo became the first Greek born Mayor of Collingwood in 1977 and the following year was elected to the Legislative Assembly in the Victorian Government as the state Member for Richmond 1978-1988. It was in this household that Anthea discovered her voice, musical and social. It was there that she longed to be Julie and eventually, when Anthea finally re-emerged, it would be those years in that household, at that time, that she would return time and time again to discover and re-discover the inspiration that drives her life’s work…..I will not go through all the accolades and the awards. I will not list the numerous works, the concerts and songs, the places, the people, the joys and the sorrows. But I will stop to reflect on the enormous contribution that you have made to the Greek-Australian community through your music and through your underlying social justice which makes you one of our living treasures. I will however mention the 2007 Ambassador for Peace by UNESCO where together with the Peace band she toured and performed in Greece, Turkey and Cyprus, I mention this because it’s a significant achievement, and there have been as many a great example of how versatile and broad  her involvement and impact is……We are all shaped by our experiences. So too Anthea. Her greatest test came when as a young woman she fell seriously ill….But she fought heroically and she prevailed and has gone on to enrich our lives and to bring joy and comfort to the community which she serves with such generosity and love. Anthea has finally found her light……”

At the same event the results of the Literary Competition 2012, were announced by Cathy Alexopoulos, Coordinator of the Literary Competition. Participation from Europe and Australia far exceeded the expectations of the Board thus requiring to separate the competition into the various categories with different panel of judges. This influx of submissions brought forth a higher literary standard making the work of the Cultural League more important and relevant to our multicultural society. Mrs Alexopoulos thanked the following people who took part in the judging of the submissions- Alexander Giannadakis,  Dionysios Mertyris, Kyriakos Amanatides, Κathy Aronis, Dimitris Troaditis, Dorothy Poulopoulos,Costas Dimaras, John Dimakakos, Koula Teo.

The certificates were presented to the winners by Mrs Lianidou and Mrs Vamvakinou. Mrs Alexopoulos also congratulated the award winners and wished them all the very best in their future literary endeavours.

Next Anthea Sidiropoulos took centre stage. Clearly overwhelmed and touched by all the proceedings and feeling rather stage-struck, Anthea went on to thank the GACL for this overwhelming dedication. She also thanked many people who have played a very important role in her life and her career not failing to mention her late father Theo and her mother Poppy. Her mother, who was also in the audience, full of admiration for her daughter, was clearly moved by the performance and the powerpoint presentation that unfolded her daughter’s life’s journey. Anthea, accompanied by the talented bouziki player, Jacob Papadopoulos, belted out some of her better known songs and got the audience to participate in what eventuated into a most memorable afternoon.