The opening of the «Antipodean Palette» 2014

Once again with great success the Greek Australian Cultural League of Melbourne was proud to present its annual art event, «Antipodean Palette» 2014. Opening night οn 22nd May attracted many visitors who came to view the range of works on display. These include paintings, prints & digital art, photography, mixed media, the ancient art of pyrography.

This year’s exhibition, the fourth of its kind, was attended by many enthusiasts and supporters of the visual arts as well as Ms Maria Vamvakinou, Federal Member for the seat of Calwell. In her brief message Ms Vamvakinou praised both the participating artists and the efforts of the Greek Australian Cultural League whose aim is to advance and showcase the creative endeavours of Greek Australians. She suggested that the third generation artists of Greek descent be promoted and their outputs be displayed in different venues outside the confines of the Greek community. She hoped that the GACL continue to support in this vain the work of the numerous artists that exist in our community.

The exhibition was launched by Professor Nikos Papastergiadis from the School of Culture and Communication at the University of Melbourne. In his inspirational speech and absorbing presentation he congratulated the GACL for its foresight to hold such events and continue a tradition that is an essential part of our existence. He shared some brief comments about what each artist managed to capture in their art work…cannot distinguish works that are created by first, second or third generation…the element of our culture tells us who we are and where we come from…how a particular artist captured the Greek background and the Australian landscape…the pathway is very sensitive and the comparisons which are created are interwoven…

Professor Papastergiadis went on to comment on the meaning of the sentence…“What sort of worlds do artists make when they make a work of art?” that appears  in his latest publication, Ambient Perspectives (2013), “…they create a “cosmos”,… a place which makes it attractive,…which is welcoming to others,… the artists feel gratification,… simply making something that you can participate in, …the artists want to make it attractive to be connected with each other,… the artists want to make this encounter come closer with the audience…”

The President of the GACL, Cathy Alexopoulos, in her speech welcomed all present and stressed that this annual group exhibition is part of the main aims of the League and its 44-year history makes it one of the oldest and most prominent cultural organisations in Australia.

She also thanked  the distinguished guests, visitors, committee members and of course the loyal supporters of the GACL –The VMC, Neos Kosmos, Ta Nea, Agora Dialogue, 3XY, SBS Radio, 3ZZZ, Omiros College Kalimera Kids, Sigma Printers, Anagnostis. A special mention and congratulations were made to Vasy Petros, coordinator of the “Antipodean Palette” 2014 for her invaluable and dedicated contribution to this year’s exhibition.

The coordination for the afternoon’s proceedings was made by Frixos Ioannides, who was the first coordinator of the exhibition in 2011 and the instigator behind the idea for a group exhibition to showcase the visual arts in the Greek-Australian community.

In his introduction Frixos referred to the idea that the artist lives and creates in his/her own world and does not have the time to develop relationships with other like–minded people and there is a need to foster and develop this type of group exhibitions that will  expand their social and professional network. “…. Artists are often too busy working and have very little time for networking with other artists or with the community. The Cultural League, through its events and activities, facilitates the interaction between artists and brings people of common interests together so they can share experiences and participate in art and culture. For those of you who may want to expand your network, to get to know more people, or to meet artists, you need not look further than this organisation.”

A special musical interlude was graciously provided by the musical duo “PolyXeni” who played rembetika songs. Social mingling and great company interlaced with fine wine and appetising nibbles followed into the night. 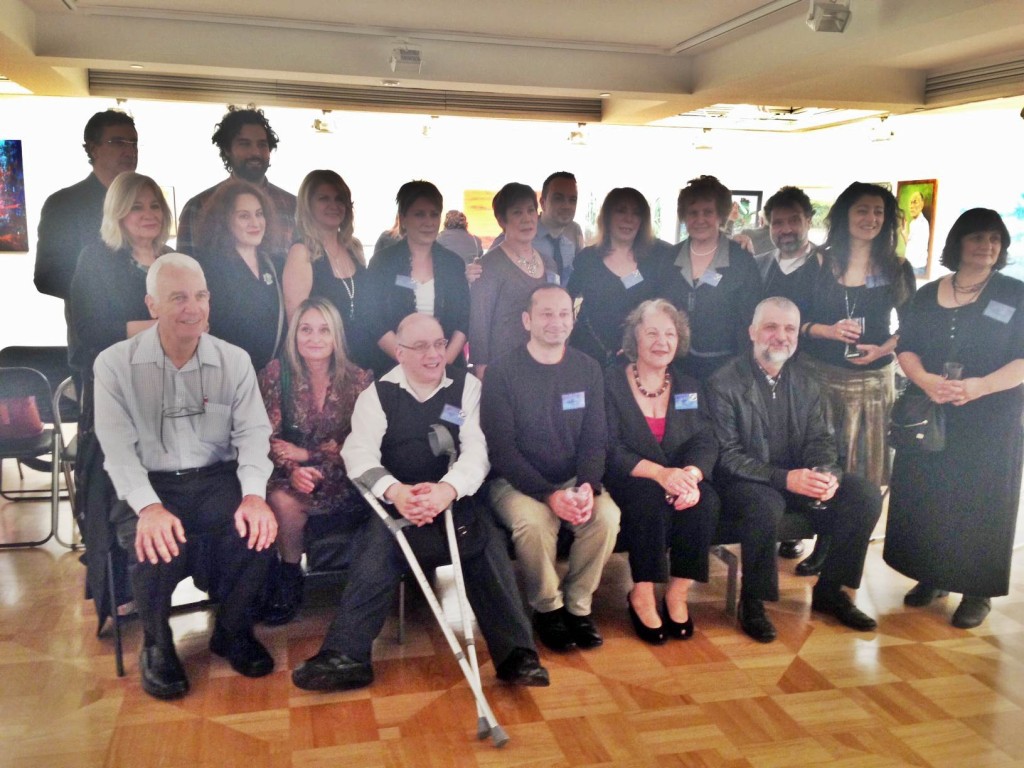