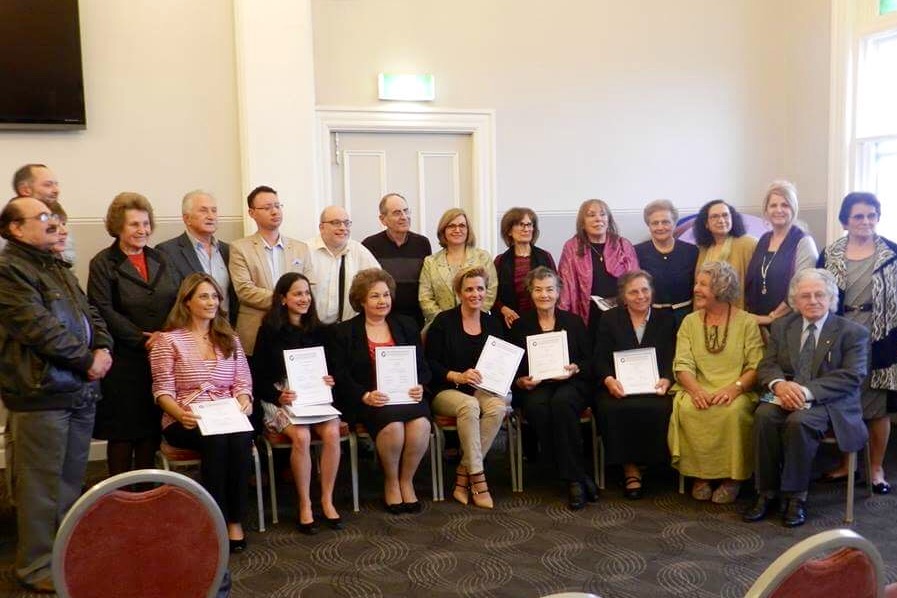 On Sunday 16th October, the launch of the much anticipated annual, bilingual periodical Antipodes issue No. 62, took place at the Panarcadian Association “O Kolokotronis” in North Melbourne and the results of the Literary Competition were announced.Antipodes is published by the Greek-Australian Cultural League of Melbourne.

This periodical’s longevity has spanned for 43 years making it the longest Greek-Australian periodical circulating in Australia.

Present at the launch were friends of the Greek and English literary word including Mr Kyriakos Amanatides the Honorary President of the GACL, many other academics, Presidents and representatives from various organisations, the media and prize winners of the Literary Competition.

Cathy Alexopoulos, President of the GACL, in her welcoming speech referred to the longevity of the periodical as having expanded its horizons, content, appearance and layout in order to make it more relevant to the younger generation as well as reflecting the aims and objectives set out in the League’s constitution in 1970. The emphases on the quality and the timelessness of the content have elevated the periodical to an important position in the ecumenical Hellenism.

The President made a special mention to the transformed new publication- layout, graphic design, general aesthetics and eye catching front cover based on a work by Helene Athanasiadis, exhibited at the group exhibition Antipodean Palette, in August this year. She acknowledged and thanked Stavros Messinis for his hard work, commitment and input towards all these positive changes, continuing the high standard he set in last year’s publication.

This year’s sponsors of the periodical were the Ithaca Philanthropic Society, Tassos and Toula Douvartzides from Kalimera Kids Omiros College and Vlassis Mavraganis from Mavraganis Greek School. Those together with Paul and Connie Gregory also sponsored the First Prize awards of the Literary Competition. The President thanked all for their generosity. Cathy Alexopoulos continued to thank the Panel of Judges who took part in the Literary Competition, Dr Angela Evangelinou-Yannakis, Mrs Andrea Garivaldis and Mr Dean Kalymniou for their commitment and support in judging the submissions. She also thanked all the participants and the winners of the Competition.

She also acknowledged the work done by the GACL Administrative Committee and the contribution made by the media-newspapers Neos Kosmos and Ta Nea, as well as 3XY, 3ZZZ, SBS and TGA.

This year’s issue paid tribute to the late distinguished Greek-Australian poet Dimitris Tsaloumas. In launching the periodical, Ms Helen Nickas, academic, writer and publisher of works by Tsaloumas, remarked that his was a particularly remarkable voice of the first generation of migrants: his first bilingual book The Observatory [Το Παρατηρητήριο], attracted the Best Book of the Year award in 1983 in Australia. This award became the catalyst for the extensive reach of Australian literature beyond the purely Anglo-Saxon establishment.

Ms Nickas went on to say:

[…] “Dimitris Tsaloumas wrote in both Greek and English, while he also possessed an excellent knowledge of Italian and French. Language was his valuable  tool and he used it in all the manifestations, writing, translating and jumping from one language to another with amazing dexterity. The tribute includes essays on his poetry as well as a bibliography for those who desire to study his work in depth. He was truly a poet of international repute”.

The periodical Antipodes does not represent the endeavours of the first generation of migrants only.  Increasingly, the most recent issues include works of literature and visual arts that come from the second generation. As Ms Nickas aptly stated:

[…] “The principal characteristic of this issue is the juxtaposition of the first and the second generation, while the periodical reflects our continuously evolving identity from monolingualism to bilingualism and from our purely Greek identity to the wider, bilingual and multicultural identity.

Also, Ms Nickas emphasised that “Additionally, the second generation moves into the interstice between the first generation of migrants and the Australian culture, trying to keep the two sides in equilibrium” and she expressed the wish to see Antipodes being sold in Australian bookshops where “one would be able to find it easily on the shelves dedicated to periodicals of literature, art and civilisation”.

As a further tribute to the life and work of Tsaloumas, Christos Tsaloumas (son of Dimitris Tsaloumas), Alex Scovron, Melissa Petrakis and Stavros Messinis recited poems by Tsaloumas or inspired by him and his work.

Then, Ms Andrea Garivaldis, on behalf of the judges of the Literary Competition, read the judges’ report and their comments on the works submitted. This was followed by the announcement of the results of the literary Competition, the conferring of the awards to the successful authors, consisting of Award Certificates and monetary awards to the First Prize in each category (kindly donated by the sponsors) and commemorative gifts and, in turn, the reading of excerpts of their work by the successful authors.

Short Story in English
1st Prize: An encounter with the Minotaur–Paul Kiritsis.